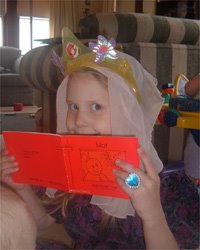 Five years ago this week, I brought home Abigail, my youngest daughter. Our first outing was to church on Mother’s Day. That was my first “official” celebration of the date since Abbie’s older sister, Rachel, had been born just after the holiday the previous year.

Abbie was a gorgeous baby. But she wasn’t easy. I often joke that I’ve blocked out much of her first year. But I haven’t really forgotten.

Abbie started projectile vomiting about a month after her birth, and we feared she might need surgery. Thankfully, a switch to soy formula did the trick. But, even as a newborn, she catnapped her way through the day rather than sleeping as she “should have.” She screamed if she were not held; I agonized that she might never smile. And she didn’t sleep through the night until she was nine months old. So I spent many an exhausted hour sobbing as I rocked and cuddled her, day and night.

But the more she was able to move, the more her mood moderated. And that all happened with lightning speed. She rolled over at two months and crawled well at six. She walked (and climbed stairs!) at eight and half months. I’ve since decided that her infant screams were saying, “Get me out of this little body that can’t do anything! I have big plans in life!”

Last week, I had the supreme honor of listening to Abigail decode her first little book. You can read the joy on her face (yes, the smile did, of course, come!). And I marvel at the peace she exudes. She is at home with herself in a way I never dreamed possible five years ago. And now she naps—sometimes for over two hours at a crack…and then goes to bed on time to boot! :^)

Five years ago, I could not imagine the joy Abbie brings me now. I was too tired. And too anxious. All I could do was walk one day at a time with her. And now here we are.

If you are at a difficult place with a child, I pray you will keep walking as well. Walk in hope and faith that God has her in His hands and that better days will come.