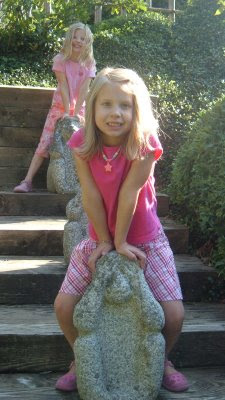 My daughters and I recently flew to Texas to spend a wonderful week with Dr. Kathy. On each flight, Rachel engaged herself in any number of activities before takeoff: examining the wing outside her window, paging through airline magazines, studying her coloring book to see which picture she’d tackle first. Not once did it seem as if she were paying the least bit of attention to the ubiquitous pre-flight instructions we all received from the cabin attendants.

But then, when my husband picked us up at the end of the trip, she suddenly declared, “Daddy, did you know that the seat cushion on the plane could be a flotation device in the event of a water landing? And, Daddy, air masks will come down from the ceiling. But Mommy should be sure to secure hers before helping us.”

She had been listening!

The kids in our lives – our children and our students – surely need guidance to hone their listening skills; they do “tune out” important instruction and direction all too often. However, we sell them short – and risk doing serious damage – if we assume they aren’t listening just because it seems as if they’re otherwise occupied.

If my girls hear me heap criticism on my husband when I’m “venting” with a friend, what do I cause them to think about their dad? If they hear me judge their teacher’s abilities, what have I done to her authority over them during class? When I taught in the public schools, if a student ever heard me ridicule another student, what would that do to their interaction as peers? to the mocked student’s trust in me and even his own feelings of worth as an individual? the listening kid’s estimation of how she could talk about others?

All of which reminds me of several proverbs. For example:


Like a club or a sword or a sharp arrow is the man who gives false testimony against his neighbor.

The words of a gossip are like choice morsels; they go down to a man's inmost parts.

During our Texas trip, we visited the Fort Worth Botanic Garden and saw three stone monkeys carved to represent an oft-quoted bit of wisdom: See no evil. Hear no evil. Speak no evil.

As an adult in a position of authority over children, it is my supreme responsibility to follow that last exhortation at all costs…so that they needn’t hear evil from me. Because, if I fail to consider that they are listening, I fail them.