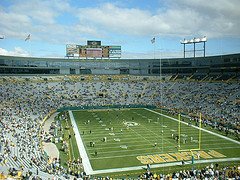 “It happened…but let’s move on.”

Such were the words the Green Bay Packers’ young running back, Ryan Grant, spoke to himself near the beginning of his team’s recent rout of the Seattle Seahawks. This, after he’d fumbled twice before two minutes had ticked off the clock…and after Seattle had capitalized on his mistakes to take a 14-0 lead.

And move on he did! In the game’s remaining 58 minutes, Grant pummeled his way through Seahawk defenders to the tune of 201 yards, scoring three of the Packers’ six touchdowns. And he did so in a blinding snow squall that caused good Seattle players to look like ducks on ice skates.

I don’t know where Ryan Grant stands spiritually. And we do well to guard against our kids’ penchant to idolize star athletes (or celebrities of any stripe). But Ryan Grant’s performance is noteworthy, especially on a day when – as a sixth-round draft pick cut last September by another team – he could have been warming the bench.

Not for his athletic prowess, but for the character he demonstrated in the process.

Grant responded to adversity with resilience and resolve that reminded me of Hebrews 12:1, in which Paul entreats us to “run with perseverance the race marked out for us.” Of course, the results of a football game have no eternal significance or even – forgive me, fellow Packer fans! – much value beyond entertainment. But I think Grant’s response to a bad situation can serve as a concrete example to the children in our lives.

Has your son failed a math test? Did your daughter bomb an audition for first-chair clarinet? Has your student earned yet another in-school suspension for habitual tardiness? Not in a flippant way, but with compassion, you can share as a tool the experience of Ryan Grant’s playoff debut. Perhaps it will motivate a child to move on toward improvement, as Grant did.

Noteworthy as well are the responses of Green Bay’s incomparable quarterback, Brett Favre, and the team’s coach, Mike McCarthy. After the second fumble, Favre pulled Grant aside and said, “I…[know] what it’s like to be in your shoes,” and “Keep running, man; don’t worry about it.” Likewise, Coach McCarthy replied, “Never one thought,” when asked after the game if he’d considered benching Grant. “It was corrected and we moved on; never gave it a thought.”

This young man’s mentors didn’t give up on him. They knew he could do the job so they encouraged him, gave him practical tips to solve the problem, and sent him back into the game. You can be just such a mentor to a child in your life.

Yes, football is just a game. But, every once in awhile, a nugget of wisdom bounces off the field. When that happens, let’s put it to good use in real life.